The DWL 2000 and 4000 laser lithography systems constitute fast, flexible high-resolution pattern generators, capable of the Professional performance level of Grayscale Lithography. The latter allows the creation of complex 2.5D structures in thick photoresist over large areas. Most common applications of the Grayscale exposure mode include the fabrication of wafer level optics used for telecommunication or illumination market segments; it is also used in display manufacturing, and in device fabrication in Biology and the Life Sciences.

In addition to Grayscale, the DWL series tools excel at binary 2D exposures, down to the highest resolution with a minimum feature size of 500 nm. With a write area of up to 400 mm x 400 mm and the optional automatic loading system, these systems provide the perfect solution if you require high-throughput patterning of masks and wafers in MEMS, BioMEMS, Micro Optics, ASICs, Micro Fluidics, Sensors, and CGHs. 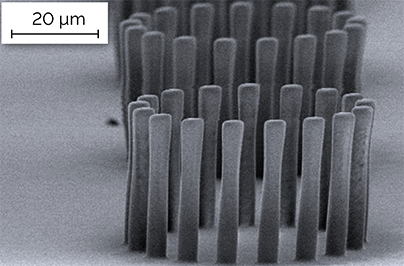 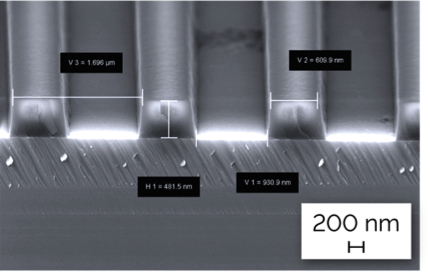 MR-DWL is a special negative resist that enables high-aspect ratio structures with an aspect ratio of up to 1:40. This epoxy-based photoresist from micro resist technology GmbH is specifically optimized for direct-write lithography and DWL systems. It is sensitive above 400 nm and can be applied in a thickness up to several hundreds of microns.

A grating fabricated using DWL 2000 in 500 nm of Shipley S1805. The groove density is 600 lines/mm with the resulting optical gratings having a wave-front error of ± 25 nm. In effective optical gratings, the wave front error must be smaller than λ / 10. Such structures are used in spectrometers, monochromators, lasers, and other devices.

A 2.5D fan-shaped structure, created in AZ4620 with a minimum feature size of less than 5 μm.

2.5D features created by Grayscale Lithography are in many cases used for microoptics. A surface may for example be structured in a targeted way to lead to controlled reflection or diffusion of light. The image shows such a type of periodic surface patterning featuring sharp peaks and tips.

A diffuser comprising pyramids with 15 µm height and 20µm base length in AZ4620 resist. Such structured surfaces created by Grayscale Lithography are key elements for microoptics applications.

A test pattern exposed with a DWL 2000 shows accurate alignment of elements exposed in two subsequent layers (arrows, crosses, arrow tips). Alignment is a crucial parameter for multilayer lithography applications, such as such as sensors and semiconductor devices.