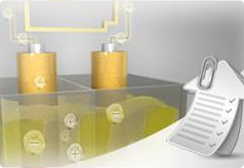 Composed of single or multiple electrochemical cells, the performance of the charge and discharge cycle in rechargeable batteries is measured through ion conductivity. The two major factors affectiong ion conductivity are the viscosity (η) and the dielectric Constant (ε) of the electrolyte solution. Achieving optimal combination of these two factors helps researchers and battery engineers develop and also control the quality of batteries. To that end, solvent mixtures are often used but the characterization of their viscosity with traditional viscometers poses a number of challenges:
1.Solvents can be very low in viscosity (~1 mPa-s) making accuracy and repeatability a requirement
2.Confinement of the volatile solvent mixtures during testing is necessary to avoid evaporation and moisture contamination
3.Solvents are often expensive and limited in quantitiy demanding for small sample volume capabilities