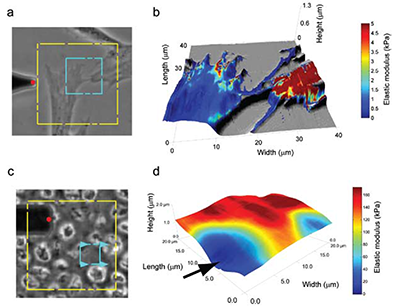 Atomic force microscopy (AFM) is able to reveal many properties about a material. Most commonly, it is used to obtain topographical information, but it can also probe mechanical stiffness, electrical conductance, resistivity, and magnetism. Researchers have used it to study interactions between enzymes and their substrates1, structural changes in injured or diseased tissue2, macromolecular interactions between lipids3 and analysis of nucleic acid organization and structure4, to name a few applications. AFM performs analyses on a micro and nanoscale, allowing it to quantify phenomena as miniscule as van der Waals forces, electrostatic interactions, and molecular bonds5. AFM is also able to produce high-resolution, detailed images of sample surfaces, displaying micro and nanoscale properties of materials as flat as cleaved mica or as non-uniform as a cell. An interesting aspect to AFM is its ability to measure multiple micro- and nanoscale properties in a single test on samples that are unfixed, unstained, and alive. Of particular use in many fields is the imultaneous measurement of topographical features and mechanical properties.

Traditional light microscopy is able to reveal a wealth of information about a sample, especially a biological one. Light microscopy can tell investigators the shape of a cell, localization of subcellular structures within the cell, and even organization of cellular infrastructure, among many other parameters. But a limitation with these optical data is that we are unable to measure, in a directly quantifiable way, the mechanical properties of that cell; these properties give investigators important information about the cell’s cytoskeletal organization and phenotype. The cell’s stiffness, quantified by measuring the elastic modulus of the cell, is different at various points across its surface; cells tend to be softer over the cytoplasm and stiffer over cytoskeletal structures. Generally speaking, AFM is able to assess both mechanical and topographical properties of any material, including cells, simultaneously in a single assay.